So you want to be an ocean scientist?

While new discoveries are made almost daily, ocean scientists believe we have a long way to go before we fully understand the 71 percent of the earth that is covered in water. Mysteries abound, and innovative technology is allowing us to look into the ocean depths in new ways.

If you’re a high school or college student with a love of the sea, an occupation in ocean sciences may be a gratifying choice. Like land sciences, there are multiple professional categories within ocean science. Requirements for different careers vary, but planning ahead will give a budding scientist or engineer big advantages.

Easily as diverse as the other life sciences, marine biology offers a wide range of choices. These scientists study the staggering array of ocean life forms, from microscopic organisms and sea plants, to marine mammals like whales and dolphins, and everything in between. Marine biologists may study underwater habitats, and how life has evolved to survive different conditions. They also research and measure human impact on marine habitats and species.

The majority of marine biologists work in government research, so the field is competitive. Other options are zoos, public aquariums, museums, or academia. Some marine biologists find jobs in private research laboratories. According to the U.S. Bureau of Labor Statistics, as of 2013, the mean annual salary for a marine biologist was $62,610. While the predicted growth rate for jobs in marine biology is somewhat low, at 3 to 7 percent through 2022, those with advanced math and computer skills will have an advantage, and advanced degrees are a requirement.

Simply put, oceanographers study oceans – but that’s an unfair generalization. Oceanographers specialize in numerous disciplines, from underwater geography, to chemistry, waves and tides (ocean hydrology), and marine ecosystems. An aspiring oceanographer must be prepared to understand several sciences, including biology, hydrology, chemistry, and even underwater volcanology.

Depending on the field, an oceanographer’s primary work is research. Much of this is done in laboratories, but most oceanographers spend time in, on, or near the water. Scuba diving skills may be needed.

Oceanographers have more encouraging prospects than marine biologists due to the oil and gas industry. Government agencies involved in environmental protection and water management also create demand for qualified oceanographers. According to Environmentalscience.org, oceanographers can find work with governments or universities all over the planet. The fast-growing job market is expected to increase 16 percent by 2022. Currently, the median salary for oceanographers is $90,890 per year.

An oceanographer needs a solid education that includes graduate degrees – the more advanced degrees, the better. Many start with undergraduate degrees in marine biology, and then earn advanced oceanography degrees with specializations in chemistry, physics, hydrology, or underwater geology.

Another huge field spanning multiple disciplines. According to the Study.com website, underwater, or ocean engineers use a combination of electrical, civil, mechanical, and general engineering practices to provide tools and technology for ocean science research. Other disciplines include subsea pipeline construction, naval architecture, and offshore renewable energy projects. Ocean engineers may work on underwater construction projects, and must understand principals of hydrodynamics, wave mechanics, coastal engineering, and even mineral resources. An additional field, shipbuilding and machinery engineering, is called maritime engineering.  Maritime engineers may spend their lives at sea as shipboard officers.

There are multiple paths to an ocean or marine engineering career. After earning undergraduate engineering degrees, which may be from specialized ocean engineering programs, many go on to earn advanced degrees. A bachelor’s degree is the absolute minimum requirement. Marine and ocean engineering can be lucrative, with current salaries ranging from $42,000 to $130,00 or more, depending on the industry. The field is expected to grow 9 percent by 2024.

The Society for Underwater Technology

What extraordinary creatures lurk in the deep blue depths? With new technology, researchers are finding out. In Norway, at the Institute of Marine Biology at the University of Bergen, scientists are investigating life at ocean depths up to 4500 meters, or 2.7 miles. The Mid-Atlantic Ridge, a sub-marine mountain range between Iceland and the Azore Islands, is their deep laboratory.

The research program, called MAR-ECO , is dedicated to studying diverse life forms along this vast, underwater mountain range. Scientists from 16 countries, including biologists, oceanographers, and engineers, participate in the challenges of learning about what life forms thrive more than 2.5 miles below the surface of the sea.

Researchers have discovered many new species, including a group of animals that may be a significant evolutionary link between species with backbones (like us) and invertebrate animals, like jellyfish. Below are a few new species.

1. Gorgon Head Starfish - Discovered at 800 meters (2642 feet) under the surface, the Gorgon Head Starfish has arms that look like a tangle of orange and pink spaghetti. This starfish, living on shrimp and plankton, catches its prey with its slender appendages, and can morph in appearance from a tight ball to a bush. 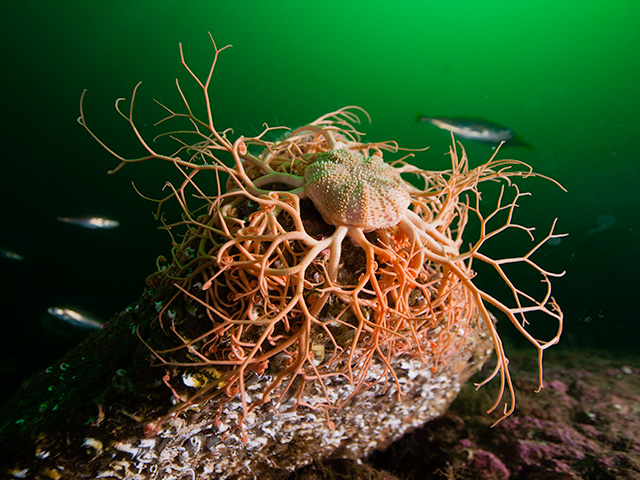 2. Hydromedusa Jellyfish - At between 700 and 2,500 meters (2,297 and 8,202 feet), lives the Hydromedusa Jellyfish. This jellyfish looks like a fictional portrayal of a torso-less alien with a transparent, globe-like head enclosing luminous, glowing spheres, and dangling legs. Smaller than other ‘typical’ jellyfish, the opportunistic Hydromedusa lives on fish, small fish eggs, and most anything it can wrap its tentacles around.

3. Benthic Holothurian - The Benthic Holothurian (Peniagone diaphana), found at depths of 2,500 meters (8,202 feet) is a member of the sea cucumber family. With an appearance of a length of folded sausage encased in floating plastic wrap, the Holothurian is a scavenger, feeding nutrient-rich sediments on the ocean floor.

4. Frilled Shark - Living at depths of 1,500 meters (5,000 feet) researchers have observed that the Frilled Shark resembles fossils of sharks that swam the seas during the time of the dinosaurs. While sightings are rare, marine biologists believe that the Frilled Shark can bend back on itself, then strike like a snake. With its triangular head and frilled fins and tails, the shark looks like a combination of an arrowhead and a lacy dress. It may live on cephalopods like squid.

5. Fangtooth Fish - Found at depths of a whopping 5,000 meters (16,500 feet), the Fangtooth Fish looks like something from a nightmare. Fortunately, the fish is small, reaching only approximately 15.4 centimeters (6 inches) in length. The Fangtooth has a huge head on a relatively small body – and a gaping mouth that takes up most of the head, filled with needle-like teeth. Scientists have observed that several species of deep-water fish share display large head sand mouths filled with sharp teeth. Rather than hunting, like sharks, the Fangtooth simply waits for fish or shrimp to drift by, clamping its teeth into whatever floats into reach. 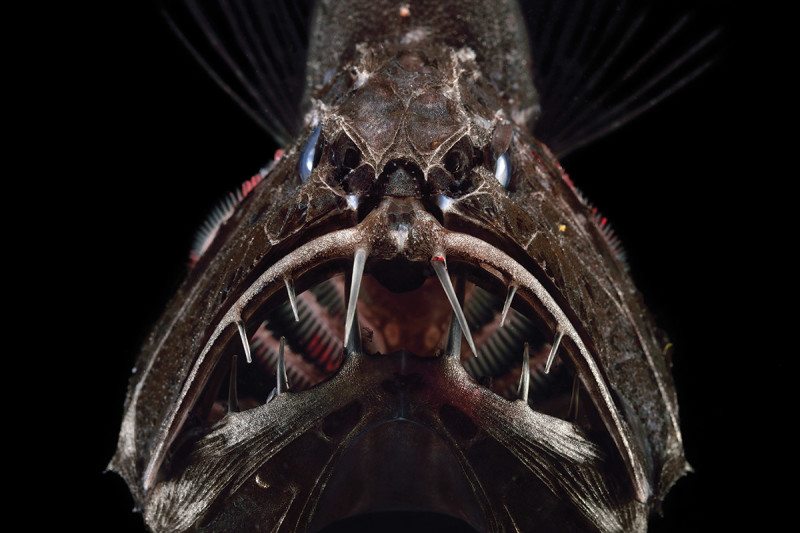 What do we know about ocean warming?

After enduring required high school and college science courses, unless you were pursuing a science degree, that was the end of stretching your brain to learn models and principals of biology, physics, and environmental science. But since the advent of the climate change debate, many have turned their attention back to earth sciences. Anyone concerned about the impacts of green house gas, rising temperatures, and their effect on our lives, must become scientifically informed in regard to the raging debate – particularly in light of our current political climate. There is an abundance of credible research that documents rising water and atmospheric temperatures worldwide, but accessing and understanding the science can be a challenge to the non-scientist world citizen.

Scientists from multiple disciplines are watching ocean temperatures to monitor impacts on weather, marine biology, and global warming. Like most earth processes, ocean warming creates interwoven, complex impacts. Researchers know that our planet’s excess energy, in the form of heat, is stored in our oceans – and that rising ocean temperatures are the direct result of greenhouse gas emissions.

The Challenger Expedition
In 1872, the HMS Challenger, the flagship of the British Australia Station, set sail on the world’s first global marine expedition. Using what was then new technology, the crew dangled thermometers overboard, measuring water temperatures at varying depths. The Challenger Expedition covered an estimated 68,000 nautical miles, measuring conditions and recording data from 1873 to 1876. The data collected with these early instruments has become a baseline for ocean temperature changes over time.

New Research Confirms Rising Ocean Temperatures
Unlikely players are stepping into the temperature debate. While the Lawrence Livermore National Laboratory’s (LLNL) mission is to enhance U.S. defense via things like ‘stockpile science,’ it now views rising ocean temperatures as a security issue. Partnering with NOAA, a.k.a. the National Oceanic and Atmospheric Administration, LLNL scientists set out to document and analyze recorded ocean temperature data accumulated beginning with data acquired by the Challenger Expedition to present.

The resulting paper, “Industrial-era global ocean heat uptake doubles in recent decades,” was published in January 2016 issue of Nature Climate Change. LLNL scientists Peter Glecker, the lead author of the paper, states that not only are ocean temperatures rising, they are rising at deeper depths. While temperature increases associated with greenhouse gas have been recorded since the 1970s, the most dramatic upsurges have occurred in the last 20 years, with temperatures doubling at some locations and depths.

Effects of Rising Water Temperatures
What does it mean when deep ocean waters get warmer? Scientists know that temperature and density have a complex relationship. As water warms, it becomes less dense. Cold water is denser – and eventually becomes ice.

As water density increases, so does salinity, or salt content. Cool and warm water temperature layers react to each other, churning towards the surface and back down. These layers contain phytoplankton, the beginning of the marine food chain. Ocean temperature changes impact marine life in profound ways – in 2016, NASA scientists announced that warming water temperatures have caused a global-scale reduction in phytoplankton.

These studies are small view of a large body of emerging research. Scientists are documenting multiple impacts of rising temperatures and the impacts of greenhouse gas, clearly observing the effect of rising water temperatures on ocean life. Researchers work at a furious pace to understand impacts of climate change, while politicians debate the science. Global citizens now, more than ever, must challenge political institutions with knowledge.

By subscribing to GaiaCam your monthly support is donated to our partners’ efforts to protect our home—save the planet without leaving your couch!

Partners broadcasting on GaiaCam can tap into our network of viewers to promote and generate revenue for their conservation efforts.

Please confirm that you want a portion of your monthly subscription to support this camera.